South Thailand’s Jungle Lake and rivers offer the angler the opportunity to catch many different fish species. Some of these fish are only found in Thailand and the neighboring countries.

The freshwater Lake where we fish; is home to some of the most popular sport fish species in Thailand. The flooded freshwater reservoir has created a perfect habitat for large populations of many different species of fish. Below you can read a description of a small selection of fish species that live in the Jungle Lake and rivers.

The species listed below are all a natural part of the fish species that living in the Lake. The information on each species includes; fish identification, scientific classification, local name, common name, natural environment, and also maximum weight and maximum length. 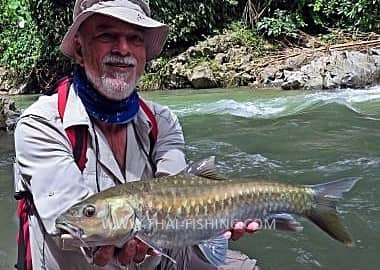 Distribution: in Asia from Myanmar through Thailand and possibly to the Cardamon Range, Salween, Maeklong and Chao Phraya peninsular in the Southeast Thailand river systems.

Habitat: Blue Mahseer inhabit the same locations as Thai Mahseer; clear forested streams and rivers, and like to stay close to rapids; which afford the shy and elusive Mahseer plenty of cover, and use rocky bottoms for breeding. Read more… 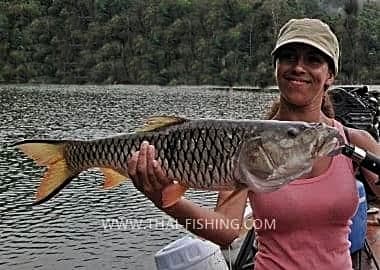 Habitat: It can be found in larger streams and rivers, old mining ponds, with streams running in, lakes and dams. The lake where we fish is one of the places in Thailand. Where there is a large population of Hampala Barb. Read more… 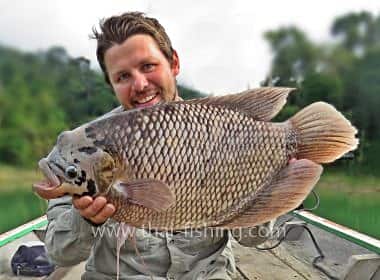 Habitat: It inhabits fresh or brackish water. Swamps, lakes, medium to large rivers, flooded forests, and stagnant water bodies. Including sluggish flowing canals, among vegetation. Omnivorous, feeds on plants and insects, weeds, fish, frogs, earthworms and sometimes dead animals. It is able to breathe moist air so that they can survive out of the water for long periods of time. Read more…

Habitat: Found in most habitat types, but most frequently in large muddy rivers, with a slow current and soft bottom. Read more…

Distribution: The Forest Snakehead is found throughout Asia, in Thailand, Japan, southern China, Viet Nam, Taiwan and in the Philippines.

Habitat: They inhabit the silty weedy bottoms of still water, but also slow-running rivers; with lots of caves and aquatic vegetation to hide in. Read  more…

Distribution: It is widely distributed in the freshwaters of Southeast Asia and some regions of India. 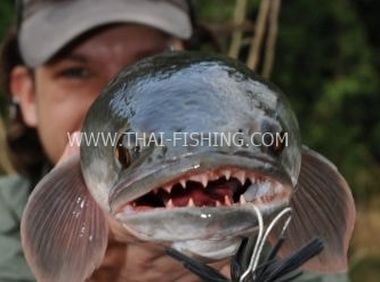 Distribution: They are native to most of Southeast Asia. But have been released in many other areas; where they have adapted with great success, including different states in US

Habitat: Large Rivers as well as in streams, ditches and manmade canals and can also enter flooded fields. Read more… 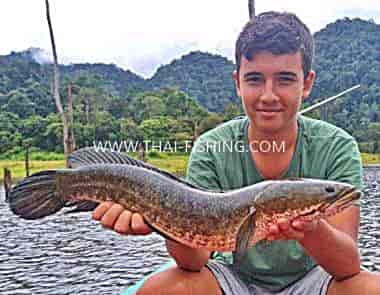 Distribution: This Snakehead species is native to South and Southeast Asia, with a widespread range covering southern China, Pakistan, most of India, Southern Nepal, Bangladesh and Sri Lanka…..

Distribution: They are Native to the Mekong basin in Southeast Asia. Historically, the fish’s natural range reached from the lower Mekong in Vietnam; above the tidally influenced brackish water of the river’s delta……

Habitat: Due to development and upstream damming, the species no longer inhabits the majority of its original habitat. The species is now believed to only exist in small, isolated populations in the middle Mekong region…… Read more…

Habitat: It inhabits lakes and the slow running water found at river mouths where there is sunken wood and rocky bottoms, also in forest-covered streams. Read more…