Bonefish in the jungle

I lay suspended between two trees peering through the mosquito mesh and listening to the cacophony of frogs and less identifiable jungle sounds. Everywhere was dark: not just dark, but the pitch black characteristic of dense jungle, far away from human habitation.

The hammock in which I lay was enclosed and compact, resembling a shallow rectangular sarcophagus, fortunately zipped to prevent insects and worse, snakes from finding me at home. I hoped the shape of my sleeping container was not an omen of a sinister jungle encounter that was about to unfold. I am in the jungle close to Surat Thani, Southern Thailand.

Besides a flooded river valley, transformed into a lake supplying Hydroelectric power, the area is home to a plethora of flora and fauna. Seven cat species including, the tiger, leopard and panther are at home in this jungle. Also, the Indian Bison, deer, the sun bear, the Asiatic bear and numerous, not necessarily friendly snakes. However, the title of Jungle King is reserved for the Asiatic elephant.

Fishing for Blue Mahseer in the Jungle

My choice from careful internet searching for a SE Asian fly- fishing experience to extend my holiday. Although. Bhutan sounded exciting; it was expensive with inflexible organised expeditions as the only fly-fishing option. Myanmar had opportunities but it was difficult to find anyone on the ground with local knowledge. 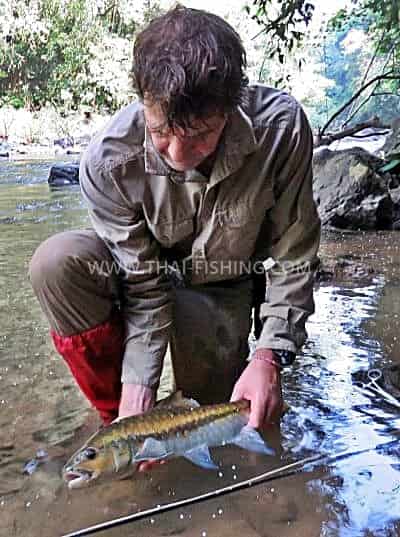 This expedition is organised by Meik a Thai living Dane, who proved to be a reliable leader. Attracted by his website, I signed up for a six-day trip, three days of which involved overnight camping in the jungle. I didn’t appreciate at the time of booking that this was to be a solo trip arranged only for me. The jungle overnight camping element required additional manpower and organisation. We were accompanied by three impressive Thai’s who acted as porters, foragers, guides and forest security guards; warding off unwelcome, potentially dangerous creatures.

As a preliminary to the camping trip

I spent the first day with Meik, our Thai guide, ‘James Bond’, they all have nick-names to which they are always referred to. He didn’t carry the obligatory Walter PPK the Hallmark of Bond but a Glock 45. All the guides were armed in some respect, either with handguns, semi-automatic 5.56, machetes and catapults! Apparently the last time the gun was fired was 2 years ago and always first with a warning shot to hopeful scare the animal away.

We took the boat as far as we could to one of a number of jungle rivers. Then hiked upstream in search of Blue Mahseer. The walking was along the river banks often wading rivers at chest height and at other times through the jungle. The jungle paths were often surprisingly wide, which was not due to humans but jungle animals most notably elephants and Indian Bison. We passed very close to the crashing sound of Elephants as we followed one of these trails. Elephants I was informed was the ‘King of the jungle’ and they were the most dangerous animal. It was critical to show that they were boss if there was an encounter by shrinking down or running away, quiet the conversation of bears or large cats.

Mahseer are related to Chub

Are look very golden in colour without a hint of blue; they live both in the fast flowing rivers and deeper pools. They are predated by Otters, which travel in a group or ‘romp’ which move downstream feeding very efficiently, leaving on the legacy of blood, scales and footprints on the river banks. The Mahseer have adapted these potential predation by being incredible easily ‘spooked’ by and disturbance in the water. Wading into a pool completely terminates the fishing; even more remarkable is that any released fish back into a pool will have the same effect. These caught fish actually need to be carried and released into the pool below if there is any hope of catching further fish in the pool.

Mahseer eat a range of foods

From flies, bamboo seeds, tadpoles and small frogs. The fly-fishing solely, with a floating line using a long cast, to present a floating fly pattern. Fluorescent Styrofoam is an ideal material for dry-flies representing bamboo seeds and insects and different nymph patterns of the Mahseer’s prey. There are similarities to bone fishing in that the fly-fishing is predominantly sight-fishing but I struggled often to locate them and was greatful Meik who could detect these with his sharp eye-sight. Although I brought several rods and lines with me, Meik’s Sage One, 6 weight and single Spey line was a dream to cast. This was finished with a 16 lb Guideline tippet.

I caught fish every day, as many as 15 on the first day but many of these were small, the larger 2 kg fish are less numerous and wiser and Mahseer up to 5kg can be caught in the rivers and 20 kg in the lake. These larger fish behave differently when hooked. I caught two over 2 kg fish and these invariable ‘run’ upstream often into the backing before rapidly descending downstream with the same velocity.

My interest in the trip

Was as much with the fishing as it was with the jungle, camping and wildlife. Over the six days we encountered numerous exotic animals, which included elephant, wild boar, deer, Otter, monkeys, fish eagles and the large Hornbills.

The most memorable however was a large King Cobra which reared it hooded head at us as it lay just feet from us on the river bank. These are the ‘good-guys’ in that they hunt other snakes but still have a lethal venom. There are number of other snakes, including the largest Python a reticulated python growing up to 33 feet, however the Malaysian pit viper is the most dangerous Thai snake with lethal necrotoxic venum. It lies camouflaged often under dry leaves and can be stepped on, rather than sliding away.

The camping trip was particularly special.

Whilst I have been fishing with Meik, the three Thai’s had portered up the hammocks, food and cooking equipment and of course a semi-automatic in case of animal hostilities! The Thai’s were incredibly adept and skilled in the jungle; at least one had been born here and could navigate and live in harmony in such a potentially hostile environment.

We camped as mentioned in hammocks with a fly sheet suspended over the hammock in case of rain. Mine was for some unknown reason sited slightly away from the others much to my slight consternation. The fire was always lite first to discourage animal and this was done frequently at other times when we fished in areas with considerable elephant presence. The fire also was the ‘cooker’ where our skilled guides modelled many different utensils out of bamboo to be used as a table, cups, water boiler and pancake maker.

The water boiler was so extremely simple and efficient using a section of tropical bamboo propped at 80 degree’s vertically to the fire and then a ladle using a smaller bamboo section with a long handle would extricate the boiling water. I have kept my bamboo cup as a memento and am drinking wine out of it as I write this. On the first night, I could hear the guides with their head-torches creeping around the undergrowth and an occasional ‘pinging’ sound. I felt somewhat comforted that they we ensuring there was no marauding wildlife, likely to feast on me during the night. It was only on the following evening that I was enlightened as to their endeavours: they had been skilfully shooting frogs with their catapults and this was dinner. I have eaten frogs legs in France but these really were a treat!

On the third day of the camping trip 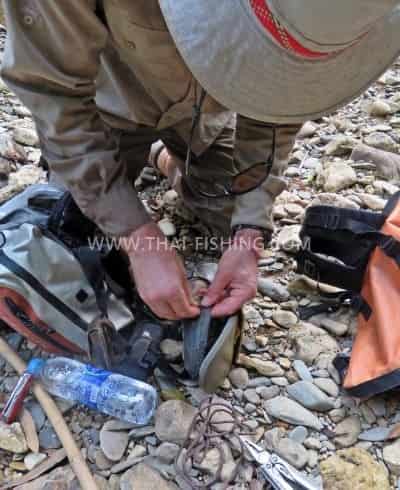 We walked back with our guides fording the river many times and walking some distance through the jungle without mishap. I had been hopelessly prepared in respect of my wading boots. My pair of ostensibly fine Scierra wading boots completely fell apart on the first way, with BOTH soles just coming away from the boot. I spent some time drilling holes through the soles with my Swiss Army knife and tying lots of individual knots with a boot-lace. This sufficed for the first day, after which I improvised with a pair of Keen hiking shoes. These were preferable to the previous day but still woefully inadequate for the jungle and fairly useless for wading purposes.

To add insult to injury, Meik’s ingenious use of tubigrip ankle compression material over one’s trousers and back over the sock prevented leaches climbing up ones legs. I blamed bear as the culprit as these were hung up along with everything else; which is suspended from the ground to prevent scorpions and such like from taking refuge in shoes, socks and bags. Anyway on the last day my tubigrip was nowhere to be seen and despite hiking gaters, I had numerous leaches which had ascended as far as my back.These feed efficiently on blood but are otherwise harmless and are now removed by DEET rather than a cigarette. They do liberate an anticoagulate; and the bleeding sites continue to ooze blood for some time.

I leave the jungle with great memories, a range of healing insect bites and a reminder that good kit and notably foot ware is essential for this trip.