Posted at 04:04h in Jungle Fishing Report by Meik

A 4 day and 3 night Mahseer fly fishing camping trip. On this fishing trip we were so far up in one of the jungle rivers. So we from day 2 fly fished in jungle waters that have never seen a fly fisherman before. And the fishing become only better and better as deeper we went 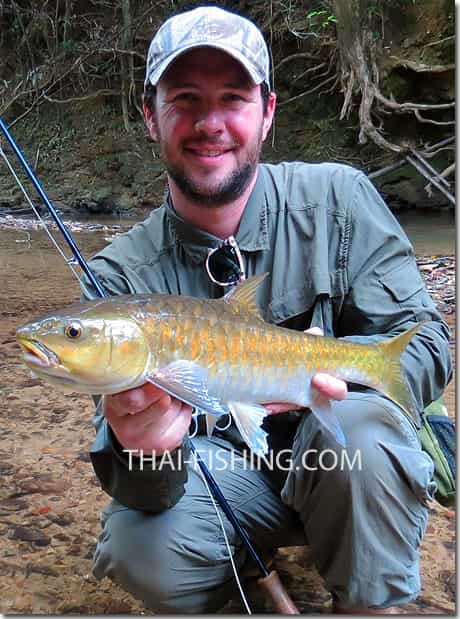 The camping trip start with pick-up at 7 am in Ao Nang in Krabi. After a two and a half hour drive arrived, Jed at the pier. We loaded the longtail boat up and headed up the lake. I asked Jed if he was ready for a long hike and the answer was yes. My plan was to go up in one of the Jungle Rivers that nobody has been far up and fish before.

After we had sailed a while, we come to a place, where you have a view over the low jungle covered hills. You could see that the jungle had got some rain. All the steam because of the sun gave the mountains a foggy look, but it was not long before the sun has burnt the last of the fog away. So it will be very hot and we had a long hike before evening and the low water levels in the lake, would not make our hike shorter.

Arrived at the base camp

We got a quick lunch, and we re-packed down smaller. We took the longtail boat, as far as we could up stream. Jumped off the longtail boat at around  1PM. We had a half hour hike in the jungle mostly uphill. before we come to the river again.

Jed was not used to using roll-cast but after a few tries, he started making some fine casts. It was not long before there also was a good length in the cast. The first afternoon released Jed some small Mahseer and Hampala Barb.

Next morning after breakfast

We continued fishing upstream. The Thai staff packed the camp down and we would meet them again later in the day upstream. Jed’s first take from a good size fish, was a Mahseer which showed its power. The Mahseer took a 15 m sprint, directly into a bush of bamboo and threw the hook. After a few lost Mahseer, Jed start hooking and landing fish. He caught about 15 Mahseer that day with a nice one on around 3kg.

Jed and me continued fishing upstream; Jed had really got control over the fly line now and caught another 15+ Mahseer. Later on in the day after a short break, where we filled our water bottles. Walked along the shore looking at footprints from elephants and some big cats. We spotted a large Mahseer on the surface, the fish came out from a hole on the opposite bank 20 meters upstream. Jed come a little closer and delivered the dry fly perfectly on the address, right on top of the Mahseer.

The fish took the fly and took off at high speed upstream, in a riffle run shallow enough. So its back was out of the water. The Mahseer took all slack line and the reel was screaming, it stopped in a deep pool 40 meters upstream. After Jed had gone 10 meters upstream, the Mahseer came back downstream like a bullet, back to the deep hole. With Jed running after it, after two more good runs downstream. Could Jed land an incredibly beautiful bright gold Mahseer, with the dorsal fin straight up in the air. It was a really thick fish around 29-30in and 4 kg.

On the last day

Jed had an agreement with his wife they should meet in Surat thani later in the day. So after breakfast we packed the camp down, and made a short cut through the jungle. Back at the longtail boat a little before noon, back to the base camp. A quick lunch and a swim in the lake, and we were back at the pier at 15:00. I could say goodbye and thanks for an unforgettable Mahseer fly fishing adventure, in good company. with with catches of some incredibly beautiful Mahseer.

On this Mahseer camping trip, we fished a stretch of one of jungle rivers, we have never fished with customers before, and from the second day. The fishing become only better and better as the deeper we went, we spotted some big Mahseer up to 6-7 kg. But they were together with smaller fish every time, in this situation it is difficult to get your fly to the big fish before one of the small grabs it.