Posted at 04:01h in Jungle Fishing Report by Meik

Finnur from Iceland had booked 3 days and 2 nights Mahseer fly fishing trip with riverside camp. The Jungle Rivers from the eastern mountains had recently got a lot of rain and were still running with too high water for fishing. 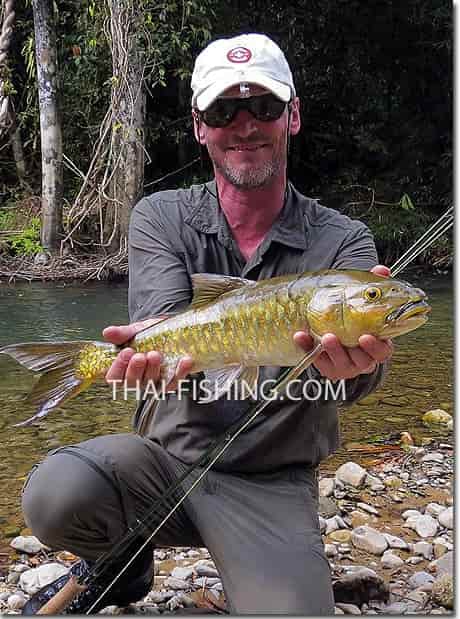 But one of the bigger rivers, where the water comes from a westerly  direction, runs with fine clear water for fly fishing. After a short stop in our jungle base camp for lunch and to make final equipment checks we arrive at the river around 12 am.

We have a hike through the jungle of about one and half hours before we can start to fish. It was easy to see Finnur was an experienced fly fisherman, it is always a pleasure to see a fly fisherman who can manage the fly line, it took only a short time before he had got used to the jungle surroundings and in contact with his first Mahseer, when we arrived at the riverbank camp, that first afternoon we had caught and released a handful of Mahseer in the 3 lbs. size.

The Mahseer didn’t let us down, after about an hour of fishing, we came to a section of the river with a mix of smaller pool’s and rapid water, from there it was difficult to do anything wrong when you cast your fly. Mahseer were almost everywhere. We connected more fish than you can count, and landed almost more than you can remember. At the end of the day we had released over 20 Mahseer, with an incredible beautiful golden colored Mahseer of 6lbs. as one of the last fish on the day.

We woke early and got our breakfast at the same time as the jungle began to wake up. We packed the camp and began the walk back to the longtail boat, at the base camp, a quick shower and lunch and 2 hours later, Finnur is on his transfer to an early flight from Phuket airport.